Vernacular Architecture is a reflection of local wisdom, which appears on both intangible and tangible subjects of a particular region. In Thailand, "Ruean Thai" known as Thai Traditional House, is made from wood with joinery details that allow the house to be constructed with a multi-functional space and structural reassembled.
In this project, there are 2 owners. The first owner of the house- the mother likes to study Dhamma and likes a Thai-style house or Ruean Thai. Therefore she needs a beautiful Thai house. But at the same time, the second owner- the daughter, prefers the comfort and safety of a western-style house. Therefore, they would like to have both types of houses that are suitable for each type of living. The architect team, therefore, proposes that choosing Ruean Thai is the pride of the homeowner. Hence, it should be designed as an eye-catching part and be used as a living room, reception, and meditation practice. While the modern concrete building is like a background that supports the Thai house to look outstanding. So, whether it is a kitchen, bathroom, or bedroom, it is designed to be in all concrete buildings.

The specialty of Ruean Thai is unturned wooden posts and the basement floor is therefore designed to lift the basement higher than normal so that it is not opaque and the wind blows easily during the day, which helps to facilitate comfortable living.
The modern concrete building with a sloping shape is designed based on the concept of ease of flow and direction of the wind as well as the illumination of sunlight. Somehow, it is mandatory to have a look suitable for Thai houses since the two buildings are designed to be connected on the upper floors for convenience of use.

Because the project owner's family is domiciled in Phanom Sarakham District, Chacheongsao Province, and have already bought the land for the retirement planning of both the parents of the project owner who want to live after retirement as a family. The second project owner- the daughter, therefore, want t to build a house to be both a residence for parents and their own families on the same land with the need to split the house into two houses. The first house is a Thai house or Ruean Thai that is for her mother's fondness for natural materials such as wood and Thai architecture. Another building is Thai Modern house with stable characteristics, modern shapes, and materials. And this brought the challenge to the architects when designing this house that the combination of Thai and Western styles should be smooth, both in terms of appearance, language, materials, and space planning. Architects must also consider the macroclimate and microclimate inside the house due to the general temperature being quite high, especially in April every year.

Due to the different attitudes in designing and building houses a project of the 2 owners that the mother values Thai houses and wooden building materials as the representative of being home. While the daughter has an idea that the homeland should consist of stability reflected through modern materials and construction methods as well as a shape that is strong, stable, and resistant to weather conditions. It is including the need for space utilization, which should be private but can be adapted to different times of the day to have an experience that is not monotonous.

Architects, therefore, need to study and research information related to the environment, such as the direction of the sun and shadow. The application of the height proportions of Thai house also needs to be used in a modern home as well as from the human point of view. This is to create a visual connection that is used in the horizontal and vertical division defining a usable plan as well as the position and size of the openings in both houses. And when the architect analyzed such basic information, it was found that the orientation of the two houses should be in parallel directions to create a sense of connection and unity. Resulting in sunlight and wind access that is obscured by the roof of the Thai house. Hence, The architect had to adjust the second floor of the project owner's house to have a oblige wall to solve such problems

From the analysis and synthesis of the needs of both project owners including various relevant design environments and conditions. Architects have decided to present a Thai Royal Artisan Family House or Thai Sakul Chang Luang house, which is the residence of the baron with a proportion of transparency and slimness, to be the residence of the parents. Also acts as the core of the development of the proportion, shape, and opening of the modern house as well as the anchor of functional space that Thai house and modern house share. On the opposite way, the modern house serves as a background and support for the use of the Thai house, especially on the roof that needs to be opened at an angle where the light enters. It is to allow the wind and sun to enter the building sufficiently for air circulation and the need for no artificial lighting during the day. But the disadvantage is the temperature inside is quite hot. Only when the air will cool down people will be able to sit on the patio. The use of the space of both houses can be adjusted and rotated throughout the day as expected by the project owners. 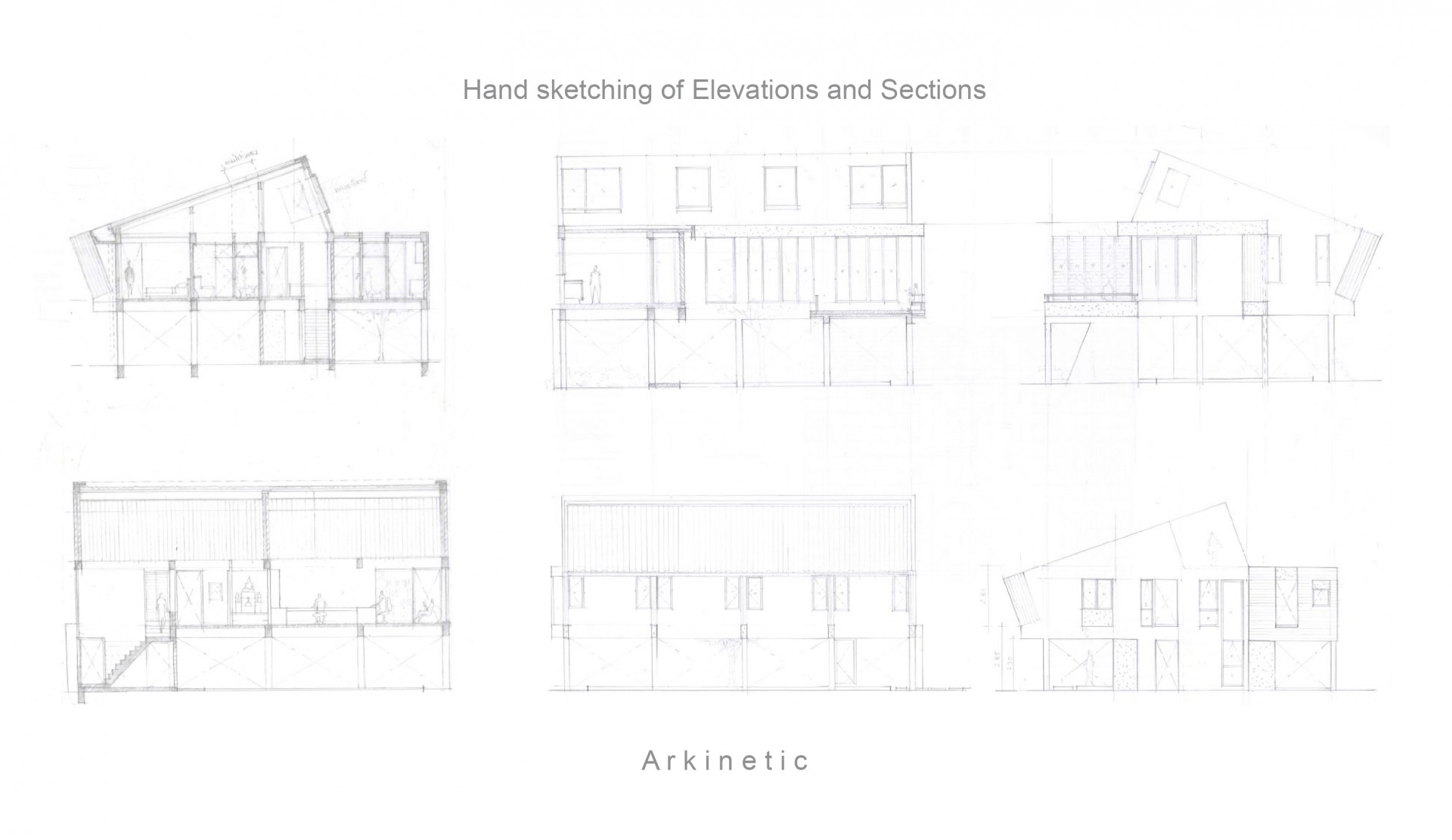 The project development is focusing on the development of volumetric design and the connection between living spaces both in Thai house and modern house over their common areas.

For instance, the height from the floor to the ceiling is 2.40 meters, which is a height that gives a feeling of openness. But not so high that it creates a sense of alienation among users in the modern house, or those who walk from the Thai house.

In addition, the design of the modern house has developed from the analysis of the environment that architects have also incorporated the language of Thai roof slopes and put into the side of the modern house facing the Thai house, in order to allow natural light and view from outside enter the inner space. And It also creates a unified architectural language.

Throughout the design period of more than half a year and one-year construction, architects can conclude that the design is consistent, that is, when the two houses begin to form began to feel the direction of the wind as studied, and when the building is nearly completed, both owners are satisfied with the quality of the area, wind, sunlight and the overall view of the building. And it is causing the design team to learn about a future project, which lays on the combination of the two different things that need a finding of a balance of shape, volume, size, and proportion in the architectural style that the owner wants, but architects have to make it unique and useable.