Brief
The brief of our studio was to aim towards a utopian era and propose a floating theme park that encouraged coexistence of humans and the marine habitat. While utopian dreams are perceived as science fiction, imagination of designs in futuristic environments, these dreams need to be considered as an optimistic proposal, a commitment to finding solutions in the wake of the worsening climate catastrophe. Optimum design solutions and biomimicry of floating natural phenomena have been developed over the years.Our proposal located on the Heron Island aims to provide a floating structure typology that biomimics corals.
Introduction. With the impending climate crisis and the Great Barrier Reef’s third mass bleaching in five years which has been the most widespread yet, corals face the major threat of being extinct. The rise in ocean temperature causes corals to expel the algae (zooxanthellae) that live inside their tissue which keeps them alive. The rate of the cycle of healthy corals changing into a stressed state and eventually followed by bleaching and death has increased drastically. This calls for a spread of awareness as well as an initiation to the betterment of the situation. Site Analysis Our proposal located on the Heron Island aims to provide a floating structure typology that bio mimics corals. Heron island is a coral cay located near the Tropic of Capricorn in the southern Great Barrier Reef. The island is situated on the leeward (western) side of Heron Reef and forms a fringing platform reef of significant biodiversity, supporting around 900 of the 1,500 fish species and 72% of the coral species found on the Great Barrier Reef.

The fringing platform allows for reef walks while the open water at the brink of the reef crest has a potential of viewing the migratory path for Mink, Humpback whales; spotting sea turtles and Manta Rays. We hope to integrate this biodiversity and help grow the numbers of the fishes as well as improve the health of the corals. Coral Inspiration Though most corals are having a hard time because of the rising ocean temperatures, research has shown that Acropora hyacinthus and Monstera cavernosa have a higher tolerance to these fluctuating conditions and have a stronger chance of survival.
Concept
INVERTED MAGNIFICATION OF REEF
Our design is inspired by the resilience of these two species and aims to accentuate its physical features. The concept of the design is to invert and magnify the reef to create spaces that marine life can experience. By combining the two corals we aim to increase the porosity of the structure.
AWARENESS
The design further aims to spread awareness about the major natural calamity of bleaching, revolving around the process of life and death of corals driven by Anthropocene and hopes to provide a new perspective on coral regeneration and growth rendered possible by the features and initiatives put forward by the project.
Form
Floating Structure
The form of the floating structure design represents the process of coral polyps of monstera cavernosa reproducing to form another polyp in their cycle of life. The budding process is extracted from the undulating shape of the coal costae to form the floating structure. The iterations show the finding on the optimal form based on the smooth functioning of the lazy river while also visually connecting all the polyps from the inside. based on the smooth functioning of the lazy river while also visually connecting all the polyps from the inside.
Platform
The platform form reflects the process of coral fusion, the final stage of skeleton formation of the Acropora Hyacinthus where the polyps combine to form a massive skeleton.
Reef
While the reef form is developed by densifying the modules of the floating structure that reduces its density away from the island. The iterations are a result of the need in density reduction to increase buoyancy as well as increasing the volume to allow people as well as marine life to swim through.
Overall design form The overall design mirrors the heron island and platform reef with its walking flats and a hollow lagoon at the center with the entrance tip facing the island.
Circulation and Program - This tip is followed by the largest platform pointing towards heron island marks
the entrance of the site with two welcoming doors. Further, the undulation in the coral bodies and connection, signifying the splitting process in a coral polyp accommodates the lazy river program of the theme park which forms the main mode of circulation.
Circulation and Program
The banks of the river are used as impromptu seating and picnic areas as well as used to access the platforms and vice versa. While the platforms not used by the slide extension is used as adaptable relaxation spaces as well as Impromptu gathering spaces for climate awareness.
Modular connection
The modular connection of these components represents the coral reproduction process of contraction where the platform acts as the empty coral cup.
Materiality
Exposed steel structure
The exposed steel structure of the entire design allows for easy welded, rigid connections as well as flexible bolted connections to create a possibility of growth of the design through modularity.
Biorock
The reef expresses itself as a biorock skeleton that has low electric currents running through them that catalyzes the calcification process and mineral settlement generating electrified artificial reefs. Research shows that corals grow 2-10 times faster with this artificial reef method and is the most cost efficient with an added benefit of functioning in all marine conditions.
ETFE
The facade’s exposed steel skeleton accommodates ETFE membranes that reflect the process of the gradual transparency change of coral tissues that reveal the calcium carbonate skeleton when they’re in their stressed state. While the basal plate mimicry in the facade allows for sunlight to seep in. This further exposes the internal mechanics of the design while separating elements.
Algae tubing
Further, the facade’s steel and ETFE structural system is combined with tubing holding algae water. This feature of the facade reflects the creeping algae formation on the corals after their death. The tubes run below the floor into the algae farm that’s used in the generation of algae renewable energy. design and is located in the subsurface. The energy is used mainly to power the bio rock that makes up the reef. These systems are stored in the subsurface of the floating structure.
Viewing Ramp
Finally, the internal space is extruded underwater for people to visually interact with the reef. It further gives people the chance to experience the process and creates an inverted fish tank.
FINAL OUTCOME
Plan
The plan emphasizes on the circulation and connectivity of the polyps
Section
The section demonstrates the interactions between the structure, people as well as the marine life through visual as well as physical connections.

The brief of our studio was to aim toward a utopian era and propose a floating theme park that encouraged the coexistence of humans and the marine habitat. While utopian dreams are perceived as science fiction, the imagination of designs in futuristic environments, these dreams need to be considered as an optimistic proposal, a commitment to finding solutions in the wake of the worsening climate catastrophe. - Optimum design solutions and biomimicry of floating natural phenomena have been developed over the years. - Our proposal located on Heron Island aims to provide a floating structure typology that bio-mimics corals. 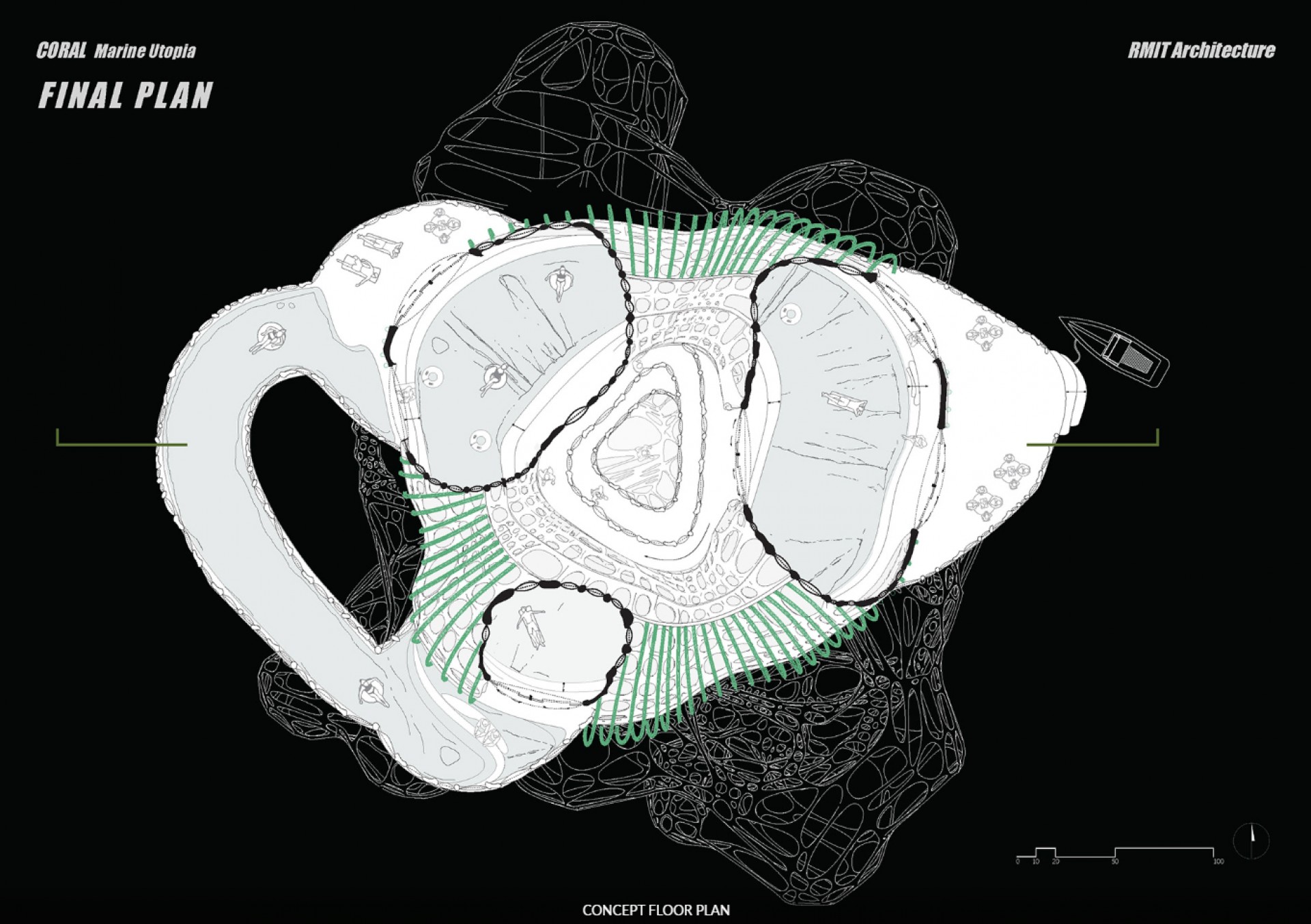